What is the Early Start Denver Model? 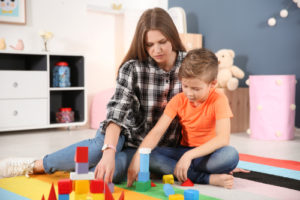 If one studies autism and its associated treatments, they will quickly learn that most behavioral therapies have the most success when they are begun early in an individual’s life. The Early Start Denver Model (ESDM) is a valuable therapy approach that can be started in a child’s life between 12-48 months. For parents or caregivers with children who have been diagnosed in their little years with some form of autism spectrum disorder (ASD), ESDM is often the choice of behavioral therapy that is first pursued.

In decades past, the unfortunate reality was that many parents of children with ASD lacked helpful treatments or therapies, and instead were often encouraged to institutionalize their little ones. Today, continued growth in the areas of cognitive science, behavioral disorders, and associated helpful treatments has provided relief and support to parents and caregivers, enabling them to nurture (and keep) these children in their own homes.

The ESDM is one of these valuable new(er) therapies. With specific training and certification, the ESDM model can be engaged with and/or used by a variety of professionals, including psychologists, behavioral specialists, occupational therapists, speech and language pathologists, early intervention specialists, and developmental pediatricians. Below, the model is explained and explored, for the benefit of parents, teachers, caregivers, and those interested in pursuing a path of specialized therapy.

What the Model Does

The ESDM is based on the Denver Model, which is normally applied to older children with ASD. The early version of the ESDM was developed by Geraldine Dawson, Ph.D. and Sally Rogers, Ph.D. as an early behavioral therapy approach for children with some form of ASD. As mentioned, it focuses on the age group between 12-48 months and it is based on the methods of applied behavioral analysis (ABA).

The ESDM has been created in such a way that the lessons/therapy can take place in a variety of settings. Parents and therapists can both use play-based therapy, wherever they are, to work towards the development of positive relationships and associated relational skills. This play ‘learning’ therapy is based on knowledge of where a ‘normal’ child should be developmentally. Using the knowledge of ‘normal’ development, ESDM curriculum specifically targets the areas in which children with ASD may have extra difficulty. These specific areas commonly include social interaction skills, the ability to integrate skill sets, and the ability to both form and maintain relationships.

The ESDM relies on intensively tested and empirically verified teaching techniques that draw on ABA methods and field-vetted teaching practices. Above all, it strives to be a relationship-focused curriculum (with both therapists and parents/caregivers).

Some of the key features of the Early Start Denver Model are:

The ESDM prepares children with ASDs and their parents for the educational and developmental programs that will likely be suggested or encouraged later in life (like the Denver Model). Proponents of the ESDM believe that it does the essential and important work of establishing relationship-focused behaviors in children at an early age, which will prove integral to their integration into larger social groups (like school environments) later in life. Today, the ESDM has become an indispensable tool to aid ASD children who struggle to connect with other members of their social context and who experience difficulty learning other related tasks.

Why the ESDM is Essential

The development and proliferation of the ESDM are not by chance. The model is rooted in strong science and based on the findings of many randomized clinical trials (RCT) which showed it to be an effective evidence-based intervention. Autism Speaks reports that the ESDM is based on over a dozen studies that included children with a large range of developmental and learning abilities, with a variety of providers (licensed professionals and caregivers) and in a variety of settings.

One of the model’s strengths is its ability to flourish or be successful in a variety of environments. It can be utilized in a clinical setting, a group therapy environment, and even at home. This flexibility makes it so much easier for parents and caregivers to ensure that their work gets ‘done.’ Another pro of the ESDM is how it builds such a strong foundation. The RCTs showed that children who received 20 hours of total instruction (with the ESDM model framework) in their earlier years went on to prosper in later programs with continued focus on social skills and language acquisition. Interestingly, and certainly worth noting, the trials also showed that children with greater learning challenges benefited just as much as child with fewer known difficulties.

Today, the model has proven itself to be indispensable to parents and caregivers of children with ASD, in large part because it assists with social development from such an early age. So much of a person’s achievement of ‘normal’ developmental skill sets are linked to their ability to communicate and interact well with others in a social context, so the ESDM does an excellent job of working on those skills from an early age. Because the ESDM offers the opportunity for learning in an integrated, socially-focused environment, the hope is that children with ASD have far fewer issues with cognitive development as they grow.

Related Resource: What Can Be Done To Prevent Autism?

One cannot deny that a less institutionally focused approach to autism has greatly benefited the families of children with ASD. Evidence-based interventions like the ESDM have played a large role in making this new normal possible. The ESDM’s focus on play-based therapy, it’s accessibility for caregivers, and it’s focus on the foundationally important early years of a child’s life make it an invaluable tool to the ASD therapy community, both today and likely in the many years to come.